I've been developing the design of the Raspberry Pi Wobbulator with a view to producing a self contained plugin module for the Raspberry Pi, either as a fully assembled unit or as a PCB and kit of components. This has raised a few fundamental design issues along the way, such as:


I've been exploring various options and trying out different configurations in an attempt resolve these issues.

Use the "Off-the-shelf"  DDS module or design my own?

The type of DDS module I use is widely available on eBay and elsewhere, and has been used in various different amateur radio related projects. The module is cheap, small, and easy to use, and quite honestly I don't think I could design and build anything as good for the money! Therefore I've decided to use the off-the-shelf DDS module instead of designing and building one from scratch. The Raspberry Pi Wobbulator PCB will be designed so that the DDS module can either be soldered in place or simply "plugged in". The plugin option opens up the possibility of being able to easily replace the DDS module with a higher spec one (based on the AD9851 or AD9852 chip) should such a module become available.

Use "Surface Mount" or "Through Hole" components?

Use an Onboard ADC instead of the ADC Pi module?

This one was a "no brainer" - using an onboard ADC is definitely the way to go! It will work out a lot less expensive and will mean that the PCB can connect direct to the GPIO pins on the Raspberry Pi rather than be "stacked" on top of another board. The ADC Pi module uses a pair of MCP3424 ADC chips, and I'm happy to stick with these, although one chip (which has 4 input channels) would suffice. These are only available in surface mount packages, but they are available as SOIC packages which are not too small for manual assembly.

The Adafruit prototype board I used in the construction of the Raspberry Pi Wobbulator has a SOIC surface mount chip breakout area, so I obtained a MCP3424 chip from Microchip and had a go at soldering it in place. The result wasn't too bad for a first attempt - the ADC chip is on the bottom right of the following photo. 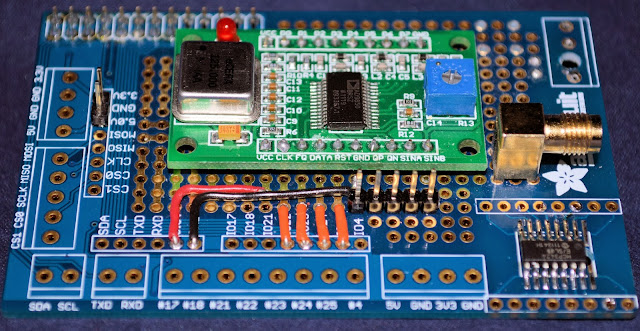 I've since connected the MCP3424 up to the GPIO pins and tested it and I'm pleased to say it works perfectly with the original software. The only modification I need to make is to give the user a choice of 4 input channels instead of the 8 that were available on the ADC Pi module.

Can the buffer amp / detector stage be incorporated into the Raspberry Pi Wobbulator PCB design?

The original Raspberry Pi Wobbulator prototype was constructed with the Buffer Amplifier / Detector stage completely separate from the rest of the circuit, with it's own power source (PP3 battery). It was constructed in a die-cast Aluminium box to provide good shielding (see my previous post for full details). I really needed to find a way of incorporating the buffer amp / detector stage into the Raspberry Pi Wobbulator PCB.

In the meantime however I came across the AD8307 chip from Analogue Devices. This chip is a Logarithmic Amplifier and it produces a DC voltage at it's output which is proportional to the level of the RF signal on its input, expressed in Decibels (dB). In other words the output from this chip is proportional to the log of the RF signal strength on its input. However this is a sensitive device and needs to be well shielded.

The AD8307 chip is available in through hole DIP as well as surface mount SOIC packages, so I obtained a through hole DIP device and mounted it on the Adafruit prototype board in an IC socket. I hardwired the output from the AD8307 chip to the input of Channel 1 on the MCP3424 ADC chip and tried it out by repeating the test of the RF crystal (see this previous post for details). The results are shown below: 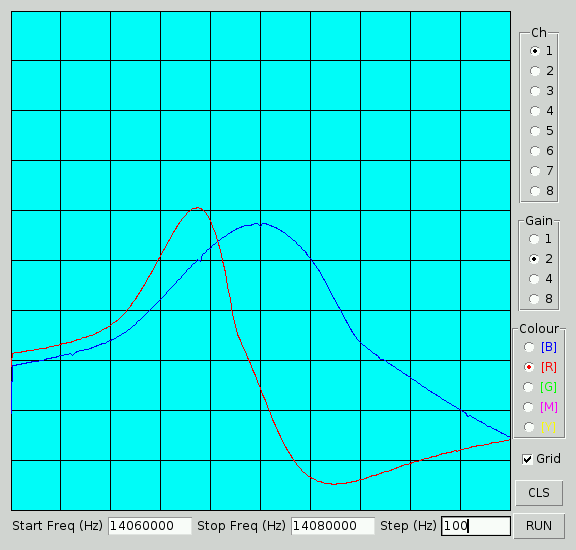 The blue plot shows the response of the crystal on its own and shows the resonant frequency to be 14070000 Hz. The red plot is the response of the crystal with a 10pF capacitor connected in parallel across the crystal, and shows the resonant frequency to be about 14067500 Hz. I was very pleasantly surprised to see that even though the AD8307 was not shielded, noise did not seem to be a major problem. Certainly based on the results of this test, using the AD8307 warrants further investigation 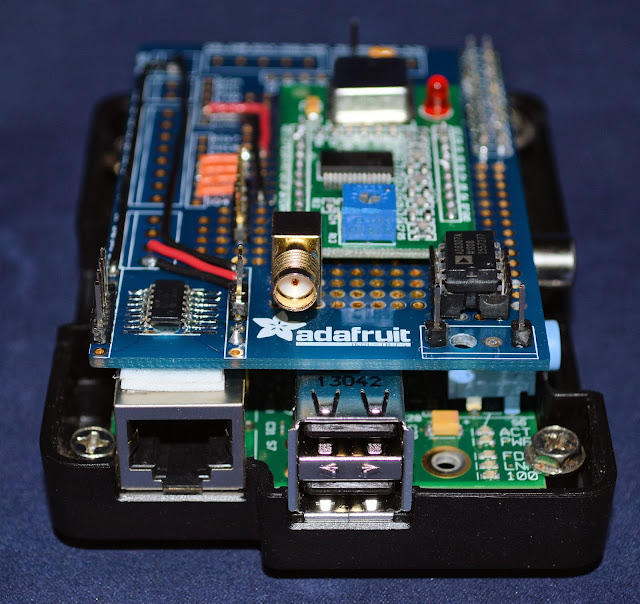 So there you have it! I believe I've developed the design of the Raspberry Pi Wobbulator to the point where it is perfectly faesible to design a PCB as a simple plugin module for the Raspberry Pi, and this is what I will be concentrating my efforts on over then next few days and weeks
Posted by Unknown at 19:06