In "PSK31 on the Raspberry Pi - Part 1" I looked at how to configure the Raspberry Pi to receive and decode PSK31 using the "LinPSK" application. Now I'll consider how to encode and transmit a PSK31 signal. To do this we need some way of "keying" the transceiver and setting it to transmit before sending the PSK31 signal. I suppose you could do this manually, but it would very quickly become cumbersome to operate this way. Another alternative would be to use the transceiver's "Vox" function (where by the transceiver automatically switches to transmit when an audio input is present), but this carries with it the risk of making spurious transmissions (for example when system sounds are generated).

The best way to key the transceiver is to directly control the PTT input using a serial (com) port. The Raspberry Pi does have a serial port of sorts as part of the GPIO interface, but this port uses 3.3V TTL logic and as such it can not be connected directly to other RS232 devices. This problem can be solved by using a "level shifter" device (like the MAX3232 chip) and this will be the subject of a future post.

The alternative is to use a USB to Serial converter like the one shown below which is available from Cut Price Cables. 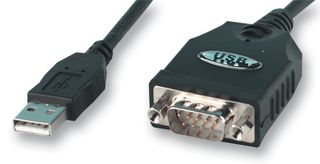 However using a USB to Serial converter with the Raspberry Pi can be problematic depending on which chipset the converter uses, but most of the incompatability issues have been resolved with the latest release of the operating system kernel and firmware. If you do run into incompatability problems you can download and install the latest available kernel and firmware by following the instructions given in this blog post. 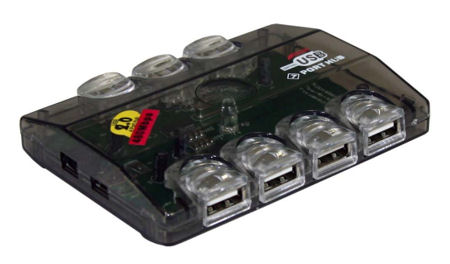 You should now have all the hardware and software you need to operate PSK31 on the Raspberry Pi. All that remains is to set up the "LinPSK" application to key your transceiver using the USB to Serial converter, write a few macros, and set up logging of contacts. I'll look at how to do this in my next post.
Posted by Unknown at 11:47