I know that I've been silent for a while, but with good reason....

I have been developing the Raspberry Pi Wobbulator, also known as the Raspberry Pi Sweep Generator & Measurement Device. A wobbulator (or sweep generator) is a piece of test equipment which is used in conjunction with an Oscilloscope to measure the frequency response characteristics of a circuit. It uses a “ramp” or “sawtooth” function generator connected to a Voltage Controlled Oscillator (VCO) to produce an output sweep over a defined range of frequencies. The response characteristics of the circuit under test can then be displayed on an Oscilloscope. A wobbulator is a useful tool for aligning the intermediate frequency (IF) stages of superhet receivers, but can also be used to measure the frequency response characteristics of RF filters and other circuits.

The RPi Wobbulator implements the functionality of a conventional wobbulator by using a Raspberry Pi, a Direct Digital Synthesiser (DDS) module and an Analogue to Digital Converter (ADC) module. The Raspberry Pi’s General Purpose Input Output (GPIO) interface is programmed to control the DDS module to generate the frequency sweep and to communicate with the ADC module to measure the response of the circuit under test. The Graphical User Interface (GUI) allows the user to choose the parameters for the frequency sweep and also displays the results.

The completed Raspberry Pi Wobbulator prototype is shown below. 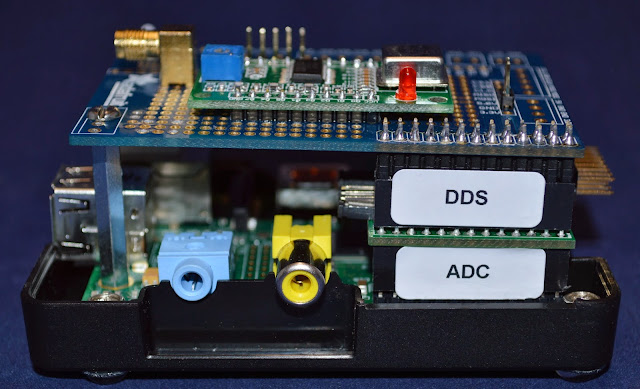 The Raspberry Pi Wobbulator was designed and built as my entry into the RSGB Centenary Construction Competition. One of the conditions of entry into the competition was that the work must not have been already published - hence the reason for my recent silence. Anyway, I'm very pleased to say that my entry won the "Pi Users" category! Here is a photo of "yours truly" receiving my prize from none other than Raspberry Pi Foundation founder and overall visionary Eben Upton (he's the good looking one on the left) at the RSGB's Centenary Convention last weekend. 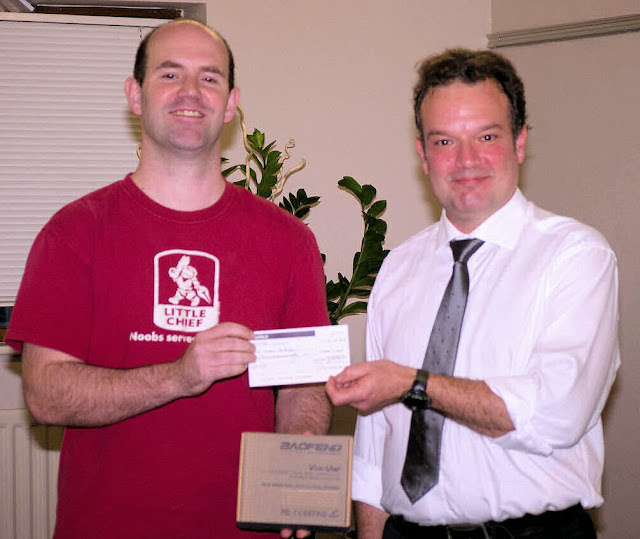 Full details of the design of the Raspberry Pi Wobbulator's hardware and software will be revealed very shortly, so please "stay tuned"!
Posted by Unknown at 13:48